I remember beginning my corporate career in the late 1970s. By the late 1980s, I had earned my master\’s degree in business. I was excited about the challenging work and opportunities to work with some of the most highly respected people in the industry. At the same time, I could see that the rules were stacked against women. So, I decided it was well beyond time to change them.

One of my first jobs was in advertising for a division of May Company. Within my first week, I was told a man was replacing the department admin person (referred to as a secretary at the time) who was a female. His salary was going to be higher than hers I was told, and he was exempt from answering the phones and typing. Well, that was not acceptable to me. So, I met with the department head and after getting confirmation about the new hire, I told him that will need to change, or I will be talking to the head of HR the next day. The department head advised the new admin that he would need to type and answer the phone and he elected not to take the job.

When I became a Vice President and was heading out for maternity leave, I was told there was a two-month leave. I simply told the staff that I would be back in three months.

One of my favorite quotes is by Sojourner Truth. She said, “If women want any rights more than they’ve got, why don’t they just take them, and not be talking about it.”

I suppose I’ve always lived my life that way and felt in my heart if I followed and lived the truth, I would be okay, and things would be better for it. I understand that not everyone is in a position to take such risks and not everyone feels comfortable in taking them. The good news is there is something each of us can do on a daily basis that will transform our workforce, our culture, and our world, one word at a time.

Our language, defined by the patriarchal society we live in, disempowers, and disappears women by definition and design.

Gerda Lerner, a historian, put it this way:

We women have had to express ourselves through patriarchal thought as reflected in the very language we have had to use. It is a language in which women are subsumed under the male pronoun and in which the generic term for human is male.

Here are just a couple of examples of our language disappearing and disempowering women.

In the first half of the 1900s, African American men were called boys to disempower them, keep them in their place, without the full rights of white men. Referring to adult women as girls is the same thing!

It disempowers women to refer to them as children. No matter her age or credentials, you will commonly hear women and men refer to an adult woman as a girl, whereas her male counterpart is a man.

For example, type in “salesgirl” on your computer and it’s a word. Type in salesboy and you’ll get the red dotted line under it telling you it is not a word. Why? Because we don’t refer to men in sales, or any other field, as boys. We call adult men in sales, salesmen.

In my new book, Call Me A Woman: On Our Way to Equality and Peace, I share habits of inequality most of us plug into and the 7 Habits of Equality we can choose instead that will help speed our way to a more just and fair world (www.callmeawomanbook.com). One of the most persistent habits of inequality is the words we choose, a choice like any other that supports inclusion and equality or does not.

Regardless of age or title, men are men at adulthood,

clear and simple, yet women remain girls for life. If we want to

be paid like an adult and treated equally, then we’d better

get uncomfortable being called children.

In truth, we don’t know which of our acts in the present will shape the future. But we have to behave as if everything we do matters. Because it might.”

Our language is a powerful way to include, empower, and lift others up. Words matter greatly and each of us has dozens of opportunities a day to shape the future.

Check out some of the ways the word women has been spelled in more recent times: womyn, womxn, womban, wimmin, and femme.

Womyn originated in the 1970s to avoid the suffix of ‘man’ or ‘men,’ and the biblical definition of women as a subset of men. (Dyuti Gupta, shethepeople.tv, March 8, 2021). However, it was believed to exclude transgender women.

When womxn stand for change in language, like saying humankind, we stand for the betterment of all people. When womxn and men stand for “mankind,” they reinforce the disappearance and disempowerment of people, greatly reducing our collective potential.

And so, it is a gift we give to one another as we share stories, ask questions, and learn about the ways we can speak more inclusively and more caringly so that one day soon “We the people” truly means all the people.

Connect with Laurie Levin on The Wellness Universe and Walk Away Feeling Better!

All information, content, and material is for informational purposes only and is not intended to serve as a substitute for the consultation, diagnosis, and/or medical treatment of a qualified physician or healthcare provider. The information supplied through or on this page, or by any representative or agent of The Wellness Universe, is for informational purposes only and does not constitute medical, legal, or other professional advice. Health-related information provided through this website is not a substitute for medical advice and should not be used to diagnose or treat health problems or to prescribe any medical devices or other remedies. The Wellness Universe reserves the right to remove, edit, move or close any content item for any reason, including, but not limited to, comments that are in violation of the laws and regulations formed pursuant to the Federal Food, Drug, and Cosmetic Act. None of the posts and articles on The Wellness Universe page may be reprinted without express written permission.

The Wellness Universe invites you to SoulTreat Wellness Retreat for Mind, Body, and Spirit. Imagine yourself and your friends in the picturesque Blue Ridge Mountains of North Carolina for self-care workshops, talks, and one-on-one experiences with wellness experts from around the globe this October.
Release what no longer serves you. Reset your mind, body, and soul.
www.WUSoulTreat.com – Savings Going on Now

Laurie Levin refers to herself as a Transformation Coach. She helps others transform and master their own wellbeing. She specializes in emotional and physical well-being including healthy nutrition and lifestyle habits, healthy weight loss and the HeartMath® stress reduction techniques. 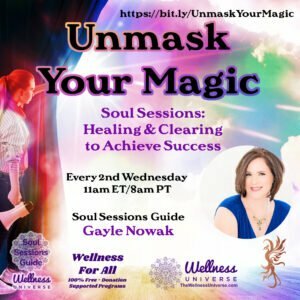