My mother used to tell me, “If you want something, get it now, because it may not be there later.”

She learned that lesson the hard way. I remember her agonizing over whether to buy a piece of jewelry, but ultimately deciding not to. Then, she’d have a change of heart and go back, only to be disappointed that the item had already been sold.

My mother may have been indecisive when it came to buying nice things for herself, but when this woman wanted to do something significant in her life, she went for it.

Like the time she ran for a seat on the local school board. She lost the election. But she tried. That’s more than most people do! Or the time she drove from Michigan to Florida with only her 7-year-old daughter (me) along for the ride. This may not seem significant now. But in 1971, it was a pretty big deal.

But, the biggest risk my mother ever took came when she was in her 50s. That’s when she learned how to fire a gun and became a Wayne County Juvenile Court Officer in Detroit, Michigan.

Now you might not be able to tell from this picture, but my mom was only about 5 feet tall (for years, she insisted her height was 5’2″ until I passed her by). So, picture this petite, middle-aged woman, dressed in officer blues, complete with badge and handgun in a holster, escorting teenagers that stood a foot or more above her from the lock-up, to the courtroom and back again. Can you say fearless? I can!

I may not have followed in my mom’s footsteps by choosing a career in law enforcement, but I have taken risky steps in my personal and professional life. And I know that I’ve had the courage to do so by emulating her.

Replying to a personal ad in the Miami Herald (in the days before apps like Tinder and Match.com) was a big risk that paid off because it enabled me to meet the man who would become my husband and the father of my children.

Well worth the risk!

I took a big leap of faith by quitting my job writing and producing the PBS TV news program, “Nightly Business Report,” to produce a business news program for a startup cable network in Florida. What made that decision particularly gutsy was leaving my husband behind in Miami while I moved 500 miles away to Tallahassee with our 5-year-old daughter and 3-year-old son in tow. Even though that job didn’t pan out, I’m glad I took the risk. For one thing, it gave me a new respect for single mothers!

Another big professional risk for me was the decision to launch my online marketing business in 2009.

Not only did I have to get over my shyness to give the ubiquitous 30 or 60-second “elevator speech” at networking meetings, but I’ve gone even further, conducting in-person workshops and webinars on search engine optimization and social media marketing.

In my 8+ years of business, I’ve learned that risks come with the territory. Every time you talk with a prospect, you’re risking rejection. Investing in different programs to enhance your business is a risk. So is investing in coaches and masterminds.

I’ve found that anytime I faced a risk that really scared me, that’s when I had to dig deep and look at why that fear was coming up. More often than not, it was because the risk involved something my heart wanted, and it was my ego getting in the way to keep me “safe.”

Once I took that leap of faith and stepped out of my comfort zone, the risk proved to be worthwhile.

Unfortunately, my mom didn’t live long enough to see me in my new role of entrepreneur. But I’m sure she’s proud of me.

I thank God every day that she showed me how much is possible in life if you’re only willing to take a risk and go for it!

Support the 2017 Wellness Universe Holiday Fundraiser, get amazing gifts, and the opportunity to win a Cancun vacation. 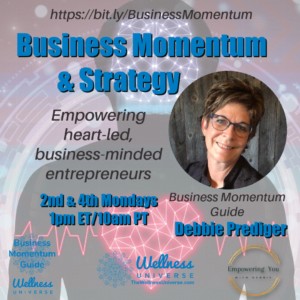